Mesmerized by a big lumpy guy

A conversation with my 4 year old just before bed.

Quinn, please put your jammies on

Quinn picks up some lego characters.


Quinn, put your jammies on and we will have time to read a story


Quinn, listen. Your teacher says we need to work on focus. We need to teach you to pay attention and listen to what we are saying

Do you mean mesmerized?

Quinn: Yes, mesmerized - I can't stop looking. Like that one time we saw the big lumpy guy, and we followed him.

At this point I'm confused. Then I remember an incident in Poland while we were out taking a walk.

You mean the big lumpy guy we saw in Poland?

Quinn: Yes, We saw him and we followed him and he led us to the dragon parade. 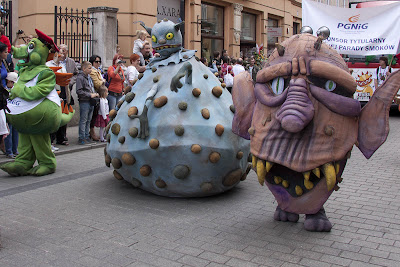 And it's all true. We were out on our way to the castle on a Sunday afternoon in Krakow, Poland when we saw a the oddly dressed creature above just walking buy. Mesmerized by the odd attire we followed him until we lost him in the crowds. At this point we started to notice all the folks just standing about and I realized they were all waiting. So we stopped and waited too. A while later the big lumpy guy returned with a few other characters. He led an entire parade of dragon floats. It was one of the unplanned occurances that was so unexpected and perfect.

The big lumpy guy had memorized us right into a dragon parade.
Posted by Murph at 10:53 PM No comments: