Here is my latest beer label: 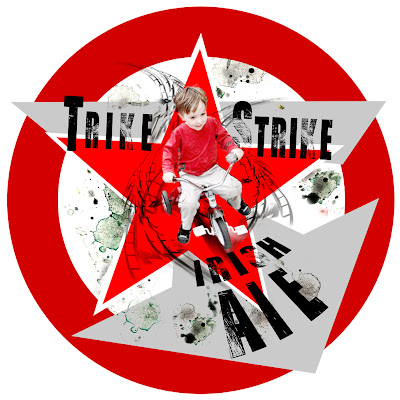 Tragically, I have the ingredients but no time as of yet to actually make the beer. My need for creative Christmas presents got the label underway ( It makes a good T-shirt ). So hopefully, the beer will be good enough to deserve the label. It will be a mix of Maris Otter Malt, some caramel malt, flaked oats, golden naked oats, and well, I haven't quite decided on the hops. I have some home grown Willamette, so they will probably be tossed in there.

I originally was excited to call this Fixed Gear Version 1 Irish Ale as I thought the tricycle - well, it truly is the original fixed gear cycle. But then I saw that there already is a fixed gear red ale. Really? And a pretty uninspired design concept. Theirs had a chainring. wow. Mine says ride. POW!

Of course, putting a trike on a beer probably wouldn't fly in the commercial world. It would be like putting a cartoon camel on cigarettes or something (oh wait, that's been done).