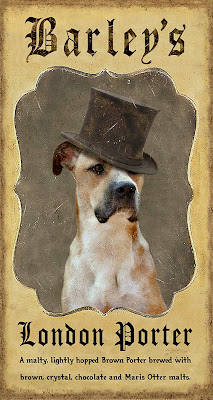 It was originally going to be called Otto's Big Bark Porter, but at 5.5% ABV, it's probably the lightest beer I've made. So, it's more like a gentle lick. And so the nod went to Barley. Otto will get Otto's Big DoppelBark, with goes much better with her name. Plus, she had a great bark complete with flying slobber that I have well documented in photographs.

So cheers to the new label.

I'm pretty happy with the way it turned out.

Ever tried getting a Boxer to sit still?
Posted by Murph at 7:32 PM No comments: